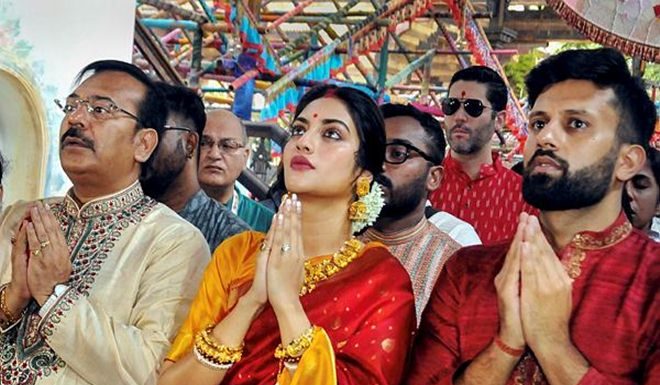 Mrs. Nurat Jahan, a Muslim, is married to a Hindu and is also an MP of Mamata Banerjee, TMC which has been overly accommodating interests of Muslims over Hindus in Bengal. As is normal for any spouse, Mrs. Nusrat Jahan is actively and with a full heart participating in Durga Puja celebrations, Bengal’s most important festival. Muslim clerics are upset as they feel they have the right to DECIDE THE Do’s and DONT’S for anyone in their community.

Unlike many before her including those in Bollywood who easily succumb to such pressure, Mrs. Nusrat Jahan could less for these threats. Instead she openly embraces the Durga Puja celebrations. Her response, “I represent an inclusive India”. CONGRATULATIONS MADAM MP. Indian and the Muslim community needs many such everyday heros …