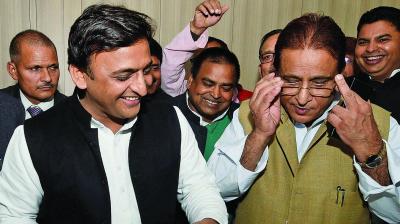 After Azam Khan made lewd remarks at the Deputy Speaker and BJP MLA Rama Devi, several have come out and condemned his act. The Samajwadi Party MP has been asked to apologise in front of the Parliament and has also met the Speaker Om Birla. However there are several who have defended Azam Khan. This includes the Samajwadi Party leader Akhilesh Yadav who found Khan’s remarks rather amusing and was seen laughing at it in the Parliament. Apart from him, Jitan Ram Manjhi presented a ridiculous argument in favour of Azam Khan. Manjhi questioned if love between a mother and son or sister and brother would be considered sexual in nature. He said that Khan’s remarks were being misinterpreted. While Khan’s remarks were disgusting, it is even worse to see that there are many who are defending him.