Bindi, Cross & Hijab Are Not the Same – ISSUE IS CHANGE TO UNIFORM DRESSCODE & COVERING FACE … 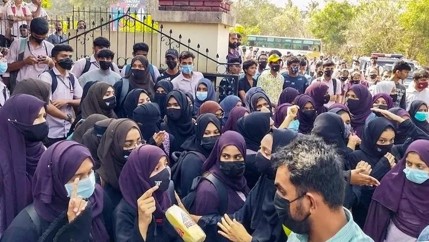 The Hijab protests are simply unnecessary. The main issue is each institution of any type has the right to set its own dress code – same applies to Schools and Colleges. Dresscode is meant to ensure uniformity, neutrality and safety for all.

Arguments are being made that Bindi, Bangles, Allah locket or ittar which are considered part of Muslim traditions. BUT THESE ARE NOT PIECE OF CLOTHING THAT ALTERS THE SCHOOL UNIFORM UNLIKE HIJAB & BURQA. And none of the former cover the face – same goes for the Turban which only covers the hair.

Another factor is there are reports of few burqa clad women and even men wearing burqa caught stealing (as even with CCTV makes it hard to catch the accused) , or stand in the midst of women to molest them, and potentially other illegal and terrorist acts – unfortunately. There is scope of illegal & criminal activity by anyone – however Hijab & Burqa makes it harder to catch the culprits.

AS YOU SEE IMAGES, WOULD YOU LIKE YOUR DAUGHTERS & SISTERS TO BE IN COLLEGES, SCHOOLS AND CLASSROOMS WHERE OTHER STUDENTS HAVE THEIR FACES COVERED UP?  WOULD THEY BE SAFE? Should you know who are the others in Your classroom or college every day, who are you dealing with – just chatting, or discussing or arguing with? Or is it that the Hijab covered students know the others as they are not covered up but the Others DO NOT know the Hijab covered students? What happens when a fight breaks out – a common spectacle in schools and colleges.

It sure is scary? SO WHAT ABOUT THE FUNDAMENTAL RIGHT, SAFETY AND WELL BEING OF THOSE STUDENTS WHO ARE NOT WEARING THE HIJAB? We are talking of schools and colleges with young adults.

A simple and rational solution suggested by many è SCHOOLS & COLLEGES HAVE THE DISCRETION TO CHOOSE THE DRESS CODE. And students who insist on a religious dress code, to study in colleges that cater to them example madrasas versus secular places.

Like the Hijab pressure on the J&K topper Aroosa Parvaiz (who refused), as a society we need to be worried about the pressures that extremist elements of society would place on girls and women of the their community, A SLOW TALIBANIZATION …