JNU’S KANHAIYA WAS FINED FOR INDECENCY & ABUSING A WOMAN 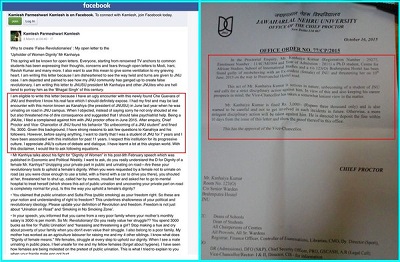 On Women’s Day, Kanhaiya was speaking of azaadi to women… really. But here is what really happened. Parmeshwari Kamlesh, in June 2015, as a former JNU student scolded Kanhaiya Kumar for for urinating in public. Per her Facebook remarks, Kanhaiya refused to apologize to her, and instead threatened her with dire consequences, and even showed her a girl his private parts amongst other things. Parmeshwari then complained, who after a full investigation issued a rebe order numbered 77/CP/2015 on October 16, 2015 ni which the Proctor found Mr. Kanhaiya guilty of ‘misbehaving with an Ex-student (Female)’ and fined him Rs. 3000. So you decide is Kanhaiya a Hero or a Zero and Fraud?