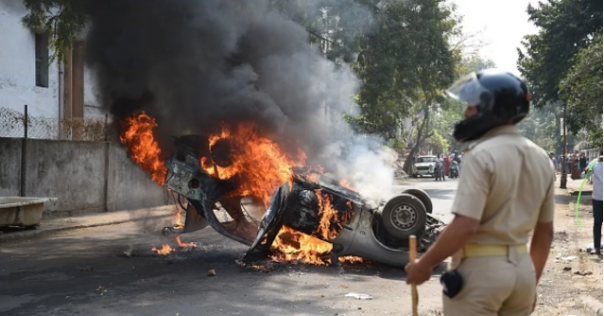 We learn that 200 people (yes 200 people – most are likely to be muslims) vandalised the house, burnt vehicles and stole huge amount of jewellery of a Hindu man because HE ELOPED A MUSLIM WOMAN IN NATURAL LOVE. They eloped in over a month ago, so this mob attack must have been planned.

In Delhi, the family of muslim woman killed a Hindu man in brought daylight and such incidents are happening all too often, with numerous such incidents not even reported. However, LOVE JIHAD – which is planned betrothal of non-muslim women and then converting them to Islam is apparently okay.

Where are the secular politicians on this? Where are they hyperactive Delhi and TV news media which makes a big deal of the most insignificant things? And where is the Supreme Court in this – which is not one to stop in stepping into almost anything… IF WE BELIEVE LOVE IS NATURAL, THEN SUCH TERRIBLE INCIDENTS WHICH ARE HAPPENING OFTEN AND WITH MORE INTENSITY IS REALLY BAD…